This may not be the last we hear of banks in the Gulf looking to pool their assets together this year in the hope of staying ahead of the competition. 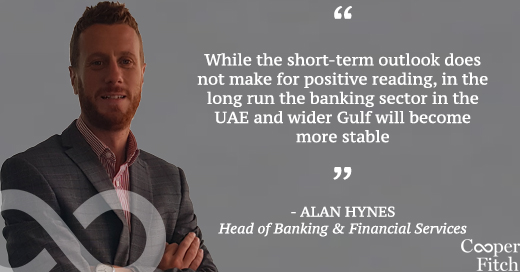 Abu Dhabi is set to see its second major merging of banks since 2017 as Abu Dhabi Commercial Bank (ADCB) and Union National Bank (UNB) confirmed they are in discussions about a merger; Al Hilal Bank is also being muted to join forces. While the news has bolstered the share price of the respective firms, Cooper Fitch has seen a surge of job seekers on the market from the three banks amid uncertainty over long-term job security. Should the merger go through, redundancies are expected across all levels of these banks as the new entity will look to consolidate its position and cut costs. A similar pattern emerged in 2017 when National Bank of Abu Dhabi (NBAD) and First Gulf Bank (FGB) entered into a mega-merger to form First Abu Dhabi Bank (FAB) currently the biggest bank in the UAE by assets. At the time, staffing layoffs were widespread leaving an oversupply of candidates in the job market with reduced opportunities in the contracting UAE's banking sector. This trend is set to continue again this year and into 2019 with the news of this latest potential merger.

Current M&A activity across the banking sector in the GCC. What is the story so far?

Discussions between ADCB and UNB on a merger are certainly not the first of its kind in the Gulf’s banking space in 2018.  Several other banking institutions in Oman, Saudi Arabia and Qatar held similar talks. Earlier this year Saudi British Bank (SABB) and Alawwal Bank merged in a $5 billion deal to create Saudi Arabia’s third-biggest lender. This signalled the first major banking merger in the Kingdom in almost 20 years. In Oman, following approvals from the Central Bank, Oman Arab Bank and Alizz Islamic Bank signed a Memorandum of Understanding (MoU) to continue dialogue around the intended merger of the two entities. Just a couple of months ago in Qatar, Barwa Bank and International Bank of Qatar reached a merger agreement to create a sharia-compliant financial institution.  This may not be the last we hear of banks in the Gulf looking to pool their assets together this year in the hope of staying ahead of the competition. Only recently the Sharjah Banks have had to come out to quash rumours of a three-way banking merger.

What are the main reasons for the increase in mergers in the UAE and Gulf?

While the oil price is rising again and currently sitting at $81 per barrel, overall the weak oil price during the last four years has hit the Gulf economies hard, and the banking industry has not been exempt from its negative impact. It has forced banking lenders to consolidate.

With a population of just 9 million, the UAE banking sector is merely overbanked and lending has slowed. There are approximately 50 corporate and retail banks in the Emirates all competing for a share of a relatively small market.

Increased pressure on the banks to sustain a high level of profitability amid tight liquidity positions has meant increased collaborations and mergers in this space which in turn reduces costs.

What impact has the latest news on mergers in Abu Dhabi had on the banking workforce in the UAE and what are the likely outcomes?

Cooper Fitch has seen a spike in the last 4 weeks in the number of job seekers emerging from the Abu Dhabi banking market. September has seen the highest number of CV applications in financial services since the beginning of the year.  The sentiment among the banking labour workforce in the capital is one of caution and preparation for the, “what if” scenario. Job stability now ranks as the number one priority among employees in the financial services sector in the UAE amid uncertain times economically in the region. While it should be noted that an agreement has not yet been fully finalised for a merger between ADCB and UNB, the expectation is that a deal will be completed and the new entity will be formed in 2019. Should this happen, we see a similar pattern emerging to the one of last year when NBAD and FGB joined forces. In the short term, there will be challenging times.

Redundancies will occur across both banks in cost-cutting measures. Priority will be given to local UAE national talent. There will be a shake-up at top senior level management with only a handful of international talent being brought in for selected roles. In some cases, employees will need to re-interview for their jobs which will no longer be guaranteed. As was the case with the NBAD/FGB merger, where there are redundancies, we do expect to see an exodus of a proportion of the expatriate banking labour force in the UAE where the demand for job opportunities will far outweigh the supply of roles. In 2017, workers who were let go with dependents of school age were particularly affected with the high costs of education in the Emirates.

What will this all mean in the long run?

While the short-term outlook doesn’t make for positive reading, in the long run, the banking sector in the UAE and wider Gulf will become more stable. Increased M&A activity over the last couple of years in this space will ensure fewer banks competing with one another. The oil price which plays a significant role in the Gulf economy is expected to continue to rise beyond its current levels of $81 a barrel. This should increase government spending to support growth in the Gulf. Banks can expect to be more profitable with greater job security for employees. A stronger banking system will ensure that hiring levels will rebound significantly from current levels in the next 12 to 24 months.